So, heard of this book yet?

I did, and it took me a long time to even want to read it because, for a long time, I judged the title as being too gimmicky.

Turns out, though, this author is sassy as hell (something we love in the Business Bitch world), and has some great things to teach.

I talk about what some of those things are in this video, as well as something I didn’t like about the book. Like, at all.

If you haven’t read the book yet, you can use the video below for cliff notes, or to decide if you want to read it.

Follow along on my journey – where I’ll talk about Profit First & loads of other things involved in running two online businesses. 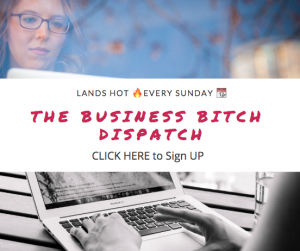 Today we’re talking about this book:

Yeah, so to be totally honest with you, I pretty much wrote this book off as bullshit the very first time I heard the title.

Yes, I was being a judgmental bitch and judging a book by its cover.

In the business, entrepreneurship, and self-employment world, there’s A LOT of gimmicky bullshit.

Like so much of it that if you DON’T judge books by their cover at least 90% of the time, you’ll be filling your brain with total crap… so it’s kind of a habit you have to fall into by default.

However, I’ve gotta say…. for whatever reason I felt compelled to order this book on Amazon, and I’m glad I did. It is not what I expected it to be.

And while this guy does claim to have “the one answer” to business problems, he’s actually hella relatable and has been through A LOT in life & in business to back up his claims.

So in this video, I’m going to talk about a few things I liked about this book, and some things I didn’t like so much.

THINGS I LIKED ABOUT PROFIT FIRST – half screen? – cover me with text?

1) The author is hella sassy

Guys, this guy is hella sassy, and I freaking love it.

But he’s not just sassy in the “ha ha ha I’m going to say dramatic and sarcastic cuss words so people will think I’m cool & funny” kind of way…. like, it’s good sass.

And if you’re in the Business Bitch world, you’ll 100% appreciate it. Mostly also because his sassiness comes out of his sheer passion for the subject.

I love people who are unapologetic & passionate about what they do, and who clearly put their heart and soul into their work. That’s obvious about this book, whether you agree with the tenets of it or not.

2) You get to pay YOURSELF first

This is one of THE most transformative concepts of the book, and one that I started implementing immediately, before I started using other aspects of it.

Ideally, according to his teachings you grow your profits to anywhere from 5% to 17%, but you start out with just 1%.

Truth be told, “profit” wasn’t even something I considered in my business before. I just assumed profit meant money that I made.

And that it was something I thought would be nice to have after all my other bills were paid…. but of course they never were…. or I’d just throw extra towards paying off business debt.

I know it’s not much, but it’s something, and it felt amazing to set that aside for me & only me.

Plus, every quarter, you get to pay yourself a bonus out of some of the money sitting in your profit account, which is really freaking cool.

And you finally get to start having the feel-good financial situation you actually wanted to have when you started your business, but quickly forgot about.

3) You get decent guidelines as realistic expectations

I know a lot of people get into the self-employed game with the dream income of “six figures” or $100,000 per year.

Even if you’ve got incredibly low overhead costs. It’s nothing near what you’ll expect it to be. Plus, taxes.

For example, last year, my business did pretty well, but my expenses were higher than usual… mostly due to investing A LOT in coaching. So it was worth it, but…

After all costs considered, I lived on less than I ever have, even though I had a fairly “good” year.

Now, yes, those investments were my choice, and they were 100% worth it.

BUT the Profit First system gives you a realistic picture of what you can expect to make.

For example, if your salary is 35% of your revenue, which is what he suggests, that’s only $35,000 per year if you have a six-figure business. Now, I know a lot of freelance-type business models can do a lot more than 35%, but still.

And if you take 10% profit and give yourself a 50% bonus out of that profit every quarter, that’s still only an additional $5,000…. so you’re still only getting at $40 grand… which is not that far off from a salary someone in their mid-20s could expect…. even though you’re “making six figures.”

You see what I mean?

It’s a rush of unpleasantly cold water over your head at first, but once you get past that, it’s actually really motivating to either cut expenses -OR- find innovative ways to increase revenue…. which is the author’s entire goal here.

4) Your business pays your tax for you

Okay, I already had this part set up because I have an amazing accountant whom… I’d basically trust with my life, but when I talk to other self-employed friends, I’m floored that so many of them are making massive payments to the IRS and the state every three months. FROM THEIR PERSONAL POCKETS!

In profit first, part of your allocation process is setting aside a certain percentage for taxes every single time you get a deposit (& never “borrowing” from that money pot), and have your business pay your quarterly estimates for you. That way, you’re covered.

So while I’d overall recommend Profit First, there were some things I didn’t like, including his outlook on debt, funding, and debt repayment.

First of all, I’m 100% on board with the idea he has that the startup mentality of “get other people to pay for our aggressive growth now & then figure out profit later” is absolute bullshit and a recipe for disaster. Because you’re going into a lot of debt without any proven profitability.

But, that rabbit hole aside… this guy is not big on using debt for leverage or funding.

Which I have to disagree with.

Look, I’m 100% about doing things as inexpensively as possible – that’s a major part of what Business Bitch helps people do.

But sometimes, you need some cash – or credit, if you don’t have the cash – to get going.

Like if you need to buy some product stock before you can sell it.

Or if you need to invest in a software that will make you money and give you leaps and bounds in your revenue.

Or if you need to pay yourself to grow a business that you have 100% confidence in yourself to create… sometimes a business loan is necessary & is NOT AT ALL a bad thing, and should not be looked at as a financial burden. It’s a huge financial blessing, actually, if you ask me to be able to get a loan when you need one.

So in the book he tells a couple of debt-based horror stories to get you scared and that the vast majority of business owners would never find themselves in, and I don’t really like that either…. it gets you super emotional over any debt you might already have in your business & makes you feel bad for having it & like you MUST pay it off ASAP if you’re any kind of respectable person… but that’s not true.

Because the thing is, having some debt for specific things that you know will help you grow is not a bad thing.

And in a way, it’s helping you contribute to the economy.

A bank or credit card lends you money, and in exchange, you promise to pay back a minimum amount every month.

And, yes, you have to pay interest… but I feel like the price of the interest (as long as it’s not loan shark-level interest, of course), is more than fair for the leverage you get in return.

You’ll make all that money back & pay it off eventually…. the interest you pay is just your fee for the service of being able to use that cash up front without having to create it out of nothing yourself. (Because trying to create something out of nothing can take a LOOOOOONNNNNGGGGG-ass time if you don’t have any financial leverage to get you there.)

So don’t feel bad about your business debt, and pay it off at a rate that feels comfortable for you…. rather than forfeiting 99% of your profit bonus every quarter to pay it off until it’s 100% gone… which is what he suggests & I don’t like that either.

So I know I ended this with a bit of a downer on how I disagree with him over his viewpoints on debt, but all in all, Profit First was a fantastic book, and I loved reading it.

And a lot of the tenets of the book are things I’m now following in my business, and I even did a revamp of my budgeting app to match his suggestions & am working them in my business.

I’m excited to get the profits of both of my businesses higher, even if I don’t pay off the debts as quickly as this guy [point to him in the book] would have me to.

And if you’re not already signed up – I send out a weekly behind-the-scenes look into me running my two businesses, as well as some business advice that helped me run a better, tighter, more efficient, or more profitable operation that week.

It sends out every Sunday at 9 am Eastern, and you can get it at BusinessBitch.com/dispatch.

So go there, sign up for it, and follow along with me implementing Profit First in my businesses, as well as ALL THE OTHER things I’m doing on a weekly basis to keep two online businesses running and profitable.

Thanks for watching today & see you soon!

Want more?!? Sign up for The Business Bitch Dispatch!