Life-changing Money When You’re NOT a Millionaire 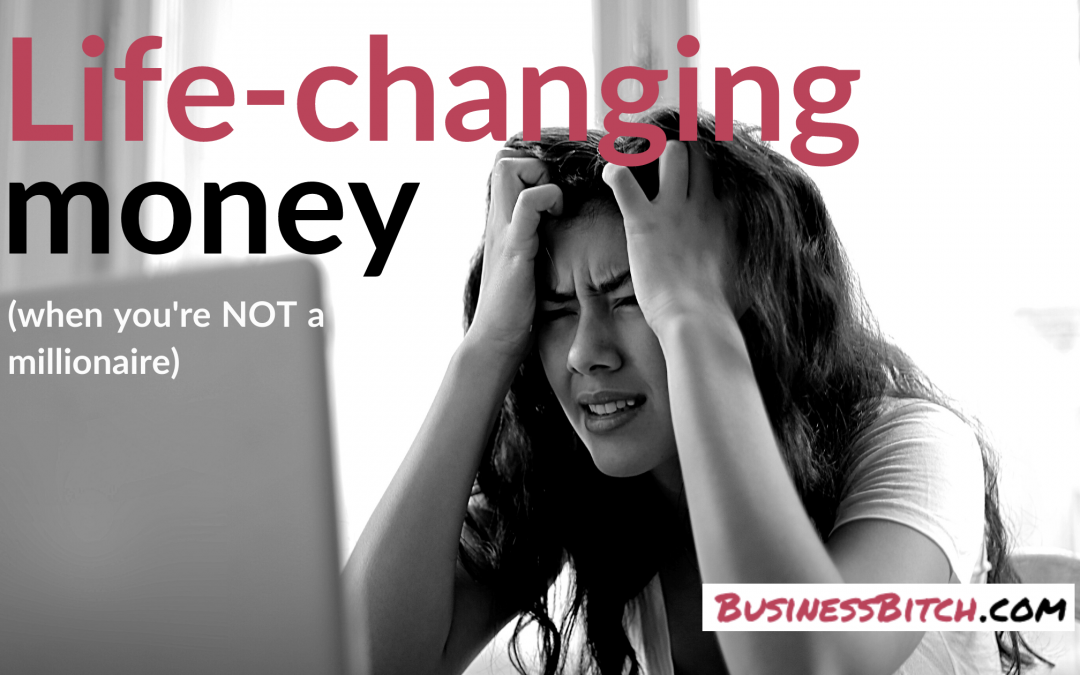 Not this “if only I could be a millionaire” talk… but the kind of dough that would vastly change the lives of most Americans, including (probably) you.

Because that’s A LOT less than a million dollars.

No way would you need to start brining in $83,333.34 per month to have your life totally financially transformed.

An extra $10,000 per month would be mind-blowing to the point that you probably can’t even imagine the ease you’d feel if you had it.

Which is why I’m so fucking passionate about making it happen.

And why my ‘Land Five-Figure Client Deals’ training is hands-down one of my FAVORITE things in the entire Business Bitch ecosystem.

The first time I used this system for myself, I landed a $14,000 deal that stretched out over three months.

That got me an average of $4,666.67 per month EXTRA on top of the money I was already earning at the time.

To say it was life-changing is an understatement.

I was able to pay off debt.

To put more money aside to retirement.

To not nickle-and-dime my “fun money” spending when I wanted to go out with my friends or to meet people.

Hell, it wasn’t even that $5,000 extra I mentioned above, but it was utterly life-changing.

And the cool part?

If I wanted to, I could have taken on 2-3 more projects like this at the same time.

Adding 3-4 projects like this per month quickly adds up to anywhere from $10,000 to $15,000 to $20,000 extra dollars on top of what you’re already earning based on your needs to provide for yourself and your family.

Which is why I teach this process, step by step, in my ‘Land Five-Figure Client Deals’ training.

It’s so good, and it’ll teach you the EXACT steps to follow to not only stand out from your competition to land more freelance, consulting, or agency gigs….

BUT it’ll also show you how to talk to clients, how to extract important information during your initial conversations with them, and how to present your offers alongside their needs in a top-notch proposal that makes hiring you a no-brainer, even if you are way more expensive than the competition.

It’s so, so fantastic.

Lives have been changed from it.

One of the first students who ever did this training used it to get paid $2,000 for a single day’s work.

Others have used it to land recurring $3,000 month-to-month retainers with clients: which is a solid $36,000 baseline for their year they can build off of.

Still others have used it to land those $10,000 to $15,000 to $25,000 big-time projects that only take a month or two to complete, and change their entire financial landscape for the year.

And right now, this course is on sale for 33% off, through next Wednesday.

If you use this to land a $15,000 deal within your first month (totally plausible), your investment price is only 1% of the return you get back.

That kind of ROI is f*ing unheard of. 🤯

So get the training now, and I’ll see you & your thousands of dollars inside. 😉

Also, here are some other sweet deals you can get with the 33% off HAPPYBIRTHDAY33 coupon code:

Talk to you soon!