Being Impatient & Being Desperate ~are not~ the Same Thing 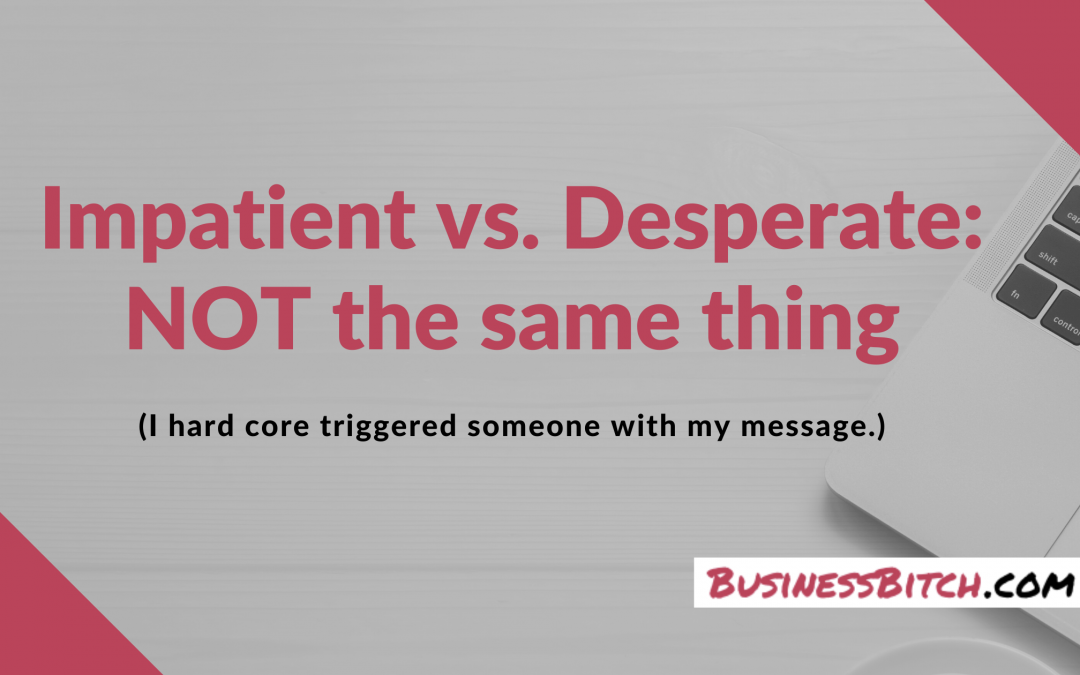 Got a little story to tell you today, sweets.

This is the story of a girl who got triggered, cried a whole river, and drowned the whole world. 😭 (shout out to those who get the joke)

We’ll call her A, and she didn’t really drown the whole world, but she did decide to show up in my inbox on Saturday to take a big shit on the street in the middle of my parade, while simultaneously trying to rain on & ruin said parade.

She’s not a Business Bitch fan or a follower, but in the process of me doing my marketing, I came across her radar. (Which, after all, is the goal of marketing: to get on the radars of people who haven’t heard of you yet.)

You see, she’s a more “conscious” entrepreneur than I am, and so clearly had to do me the favor of she-splaining and talking down to me about my message.

To quote her: “I cannot speak for you. There are so many ways of approaching business. Even my bf told me this week regarding this ‘if you haven’t lied, you haven’t tried…’ … I’m inviting you to look at this practice and ask yourself why IMpatience is such an important virtue to you and where the desperation comes from.”

Let’s glean over the fact that she’s apparently accusing me of lying about something & that apparently she’s tried lying in her business as a way to get ahead & is dating a man who encouraged her to do such a thing 🤔… and skip right down to the sentence where she “invites” me to look at why I’m so god damn “desperate” just because I’m impatient.

Apparently, because A has words like “human design,” “deconditioning,” “soul,” “abundance,” and “alignment” in her web copy, she thinks she’s more “conscious” than me and is therefore doing me a favor to “invite” to “look at this practice” of being impatient in business.

As I read the rest of her email, these were the thoughts that went through my mind:

And that last thought is what I want to talk to you about today.

No, impatience does not equal desperation.

Just because I’m impatient to make things happen in business for myself & my audience does not mean I’m desperate or showing up in desperate energy -at all.-

Have I been desperate in business before? Hell yeah I have. And I learned a lot from it.

💩 I learned that desperation stinks to the high heavens, and when you show up in a desperate energy, you repel the people who’d be best for your business away like when you put the wrong side of the magnet up to the refrigerator.

☹️ I learned that not having confidence in yourself is the quickest way to water down and dampen your message into something that’s not exciting, and so no one is ever gonna give a shit about it.

🚫 I learned that desperation -does not- breed authenticity, it breeds fakeness. And since humans have some of the best bullshit detectors on the planet, you ain’t fooling no one.

💃 And I learned, the hard way, mind you, how to pull myself up out of desperation and be confident instead. It ain’t easy. But it is possible, and goooooooood GODDDDDD do things turn around for you when you make that happen. It’s much easier to ride the wave of success when you’re there, whereas it’s impossible when you’re stuck in a mode of being desperate.

It’s entirely possible that A got trigged by my clear confidence and lack of desperation because she’s so damn desperate herself and doesn’t feel like she can show up authentically like I do…. so she latched onto my whole “impatience is a virtue” thing and decided to throw it in my face.

I don’t know what made her so mad, and I never will.

But I do know this:

Impatience ~can~ come from a place of desperation, but not in the Business Bitch world.

When someone’s impatience comes from desperation, it feels icky. It feels money-grab-y. It feels dishonest, and like you’d rather be doing other things with your time.

But when impatience comes from a place of positive desire for success & betterment of the world, it feels really, really good.

✨ It’s exiting. Inspiring. You want to surround yourself with it. When you read about it, it sets off a huge “FUCK YESSSS!!” in your mind. It’s motivating. It gives you great, new, creative ideas to try. That you’re excited about. So much so that you find yourself doing really cool things that you never thought you would, and much to your surprise, other people are LOVING it.

✨ It feels easy, even if it does take time to get the work done, and to borrow some words from A’s vocabulary, it is truly soul-led, aligned, abundant, and, dare I say it, “conscious” of the world around you.

📈 Confident impatience uses the evidence you can clearly see around you that if other people have done it, you can damn well do it too. And that hell no, it doesn’t have to take forever to build… because you can learn from their successes & mistakes, apply them to your own situation, and watch your business dreams grow.

And THAT’S what we’re about in the Business Bitch world. 🙌 If someone doesn’t like it… 🤷‍♀️

Anyway, that’s my rant for today. Hope it inspired you too. 😉

(And low key can’t wait to see the look on her face when my book on the shelves at Target. Anyone else? That would be GOLD. Because, yes, I’ve written a book and you’re fucking kidding yourself if you think I’m not gonna be impatient about making it a BIG thing when the time comes.)

Want more?!? Sign up for The Business Bitch Dispatch!