When Your Business DOESN’T Pay Your Bills 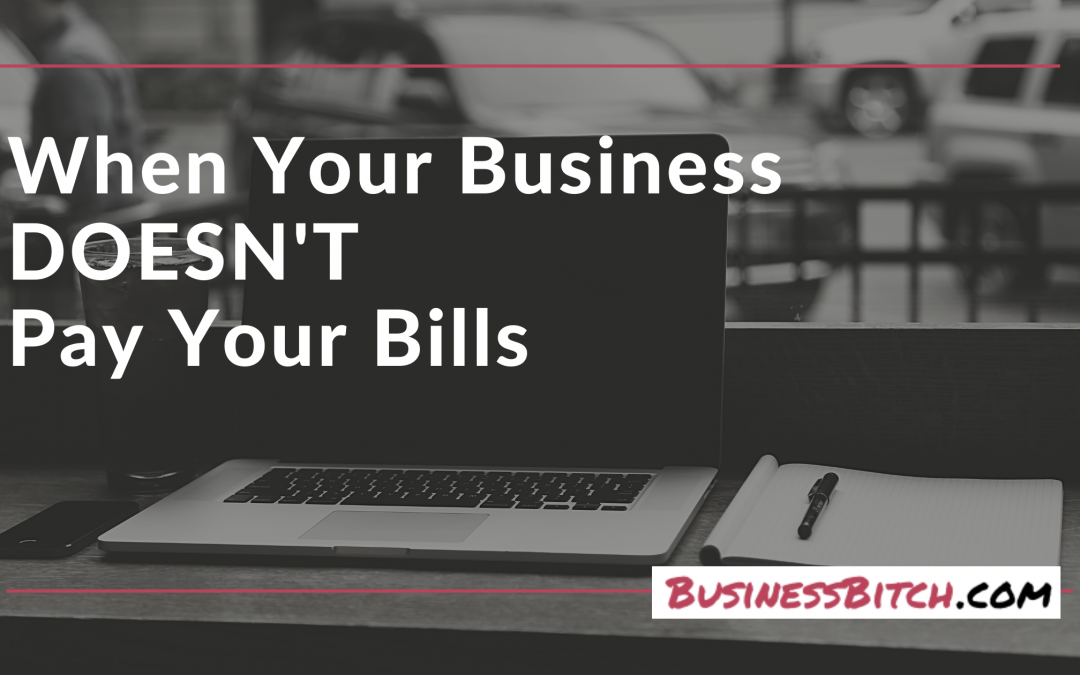 It fucking sucks, doesn’t it ?

You’re constantly doing math in your head about what you can afford, going as long as you possibly can without looking at your bank account or doing your budgeting. Because you know there’s not enough. There never is. 😐

You feel like such a fucking fraud, and you don’t even know why you keep trying any more.

Except… something inside you keeps driving you, and you might not even know what that *thing* is.

Because things would sure be a hell of a lot easier if you’d just get hired to do something, anything, really that would let you zone the fuck out of your life for 8 hours per day, and then zone back in when you bank account was nicely padded with a paycheck every two weeks.

That’d be nice, wouldn’t it?

Hell, we’ve all dreamed of it.

A few years ago, I would even take the steps as far as applying to some jobs, and then sabotaging the situation every time I got asked for an interview, because something inside me just knew that I just couldn’t.

That was was meant for something so much more, and a typical, cute, “marketing manager” or “content producer” 9-5 was not it. So, SO not. it. (No hate to marketing managers out there.)

I knew I was meant to live the path my soul was calling me to, even if it meant I had to cover some bills on credit cards or feel like I was living in not-technically-poverty-but-basically-poverty for a while. 💳

And I know a lot of you either have been there are are currently there as well.

And there’s no shame in it. Absolutely no shame.

Because as much as people like to fear-monger around entrepreneurship on how 80% or 90% or whatever% of businesses fail in the first five years… they never, NEVER tell the full story. 🚫

Like the story of the girl who started a freelancing business that she then folded to set up her now-thriving agency.

Or the guy who started his own company, struggled for 4-5 years, hit his stride, and decided to re-brand based on everything he’d learned along the way.

It always has something new to offer, if only you’re willing to mine for it.

And I know when you’re in the place of not making the money you want… or your business not even 100% covering you bills, peppy little blog posts like this \sound trite.

That my “impatience is a virtue” mantra sounds like utter bullshit because HELLLLOOOOO you’ve been impatient for a while now & it’s still not paying off.

But patience & impatience are both virtues.

And you know what another virtue is?

Following in the footsteps of people who’ve gone before you who’ve been there and done that so you don’t have to *continually* axe down massive trees, cut down poisonous vines, and fight the roaring jaguars in your way.

Because they’ve gone before you, and they’ve made it easier for you.

Part of the reason they fought so hard is so you wouldn’t have to.

Who would want to get themselves out of financial stress, and make the world a better place through their business idea while doing it.

Because they have a heart. ❤️ ❤️

Not all successful people are evil, but you already knew that. You want to be successful yourself, and you’re lovely as a peach.

And listen, I can’t teach you how to become a billionaire.

I wish I couldn’t but I haven’t traveled that road myself yet, so I’m not qualified to give advice on it.

👉 But I HAVE traveled the road of pulling yourself up out of financial stress. Of living project-to-project. (The freelancer’s or self-employed’s version of paycheck-to-paycheck.) AND not knowing where that next project was going to come from.

I’ve figured out how to make automated email sequences profitable, how to get TONS of new leads without doing awkward cold outreach that makes people cringe, AND how to repeatedly land projects worth $10,000 or more so you can finally breathe easy about your monthly and yearly finances.

I know how to get you to five figures per month, so you can live comfortably and easily. So your money doesn’t give you anxiety anymore.

And until Wednesday, you can learn ALL of that stuff for 33% off:

Just use the code HAPPYBIRTHDAY33 at checkout, and you’re set. 😉

Redeem My Coupon & Save 33% Now thru Wednesday Only!!