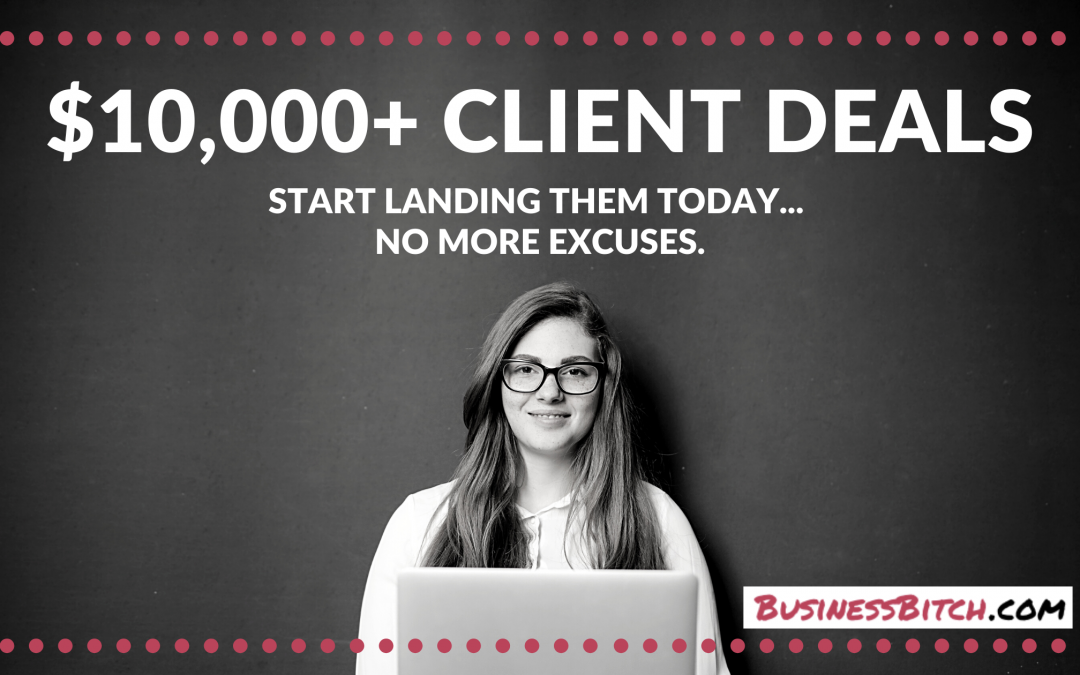 I don’t care how “new” you are to your freelancing career. 🙅‍♀️

You don’t have dues to pay, you don’t have to “put in the hours,” and you sure as shit don’t need whatever the hell kind of certification you’re thinking about buying to “qualify” for it.

Equally, this isn’t something you can wait around on, cross your fingers for, and just hope that one day it’ll happen.

Landing high-paying client deals doesn’t happen to people who just “stumble up on” them.

👉 It happens to people who know they want to earn that kind of money and are f*cking deliberate about it.

So if you’re not regularly landing the high-four-figure or five-figure freelancing or consulting deals you dream of…. Why aren’t you?

🚫 It’s not because you haven’t “been in the game” long enough.

🚫 It’s not because you don’t have that client to put in your portfolio yet… so you better not try until you get them. (I landed my first $14,000 freelance writing deal when I was a veritable nobody.)

Because, babe, I HAVE GOT YOUR BACK.

🙈 I hate seeing well-meaning freelancers struggle their asses off… living in houses with four other roommates well into their 30s or 40s when they’d MUCH rather live alone.

🙈 I hate seeing people like you devalue your own worth and heavily discount your prices just so you can get the gig you need to pay rent this month.

🙈 It sucks, and I hate watching it happen.

Which was 100% why I put my Land Five-Figure Client Deals training together.

It’s an easy-to-understand course that teaches you everything from how to stand out from the very fist “hello” you exchange with a potential client, to exactly how to book a call with someone, to the questions you need to ask during the call, to writing THE BEST proposal they’ve ever seen from a freelancer.

In terms of traditional business ROI (return on investment), that’s unheard of.

🗣 But now’s a time when we NEED unheard of ROI in business, because damn if we don’t need good business people and smart businesses to get more clients and make more money so we can collectively make the world a better place.

Get the Training Here

Here are some testimonials from others who’ve taken the training:

🗣 “I’m finding figuring out pricing/packages/sending proposals to clients just a huge headache right now. So I’m welcoming any advice on concrete processes to follow with open arms, and this definitely did the trick!“ -Suzy Cater, Freelance Writer

🗣 “Oh man, this is really going to help me. So glad I found you & this training. Can’t wait to use it!” -Amanda Lands, Web Designer

🗣 “Used it & it worked. Still basking in the glory of how easy it was once I had a system to follow. So stoked to enter a world of getting paid more for each project, and I couldn’t believe how easy closing the deal actually was. Thanks Chelsea!” -John Pritchard, Designer

So, Chelsea, ready to join the ranks of Suzy, Amanda, and John in landing $10,000+ gigs like this on repeat?

Get the Training Here

🤷‍♀️ Because what else are you gonna do this weekend? 🤷‍♂️

Sit around and wish your life was better? 🙅‍♂️

Or DO something to actually move the needle forward? 👈 😉

Get the Training. Land a $10k Deal as Early as Next Week.